The original article was written for and published by Animation World Network. Below are a few excerpts. 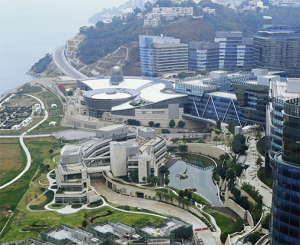 Cyberport is as futuristic as its name implies. The 59-acre digital IT hub on the southern coast of Hong Kong Island is an intricately planned coexistence of gleaming commercial and entertainment facilities, and pristine residential complexes, all surrounded by an organically manicured park-like setting. Virtually every nook and cranny is interwoven with the latest technologies: audio-visual displays pepper the premises, smartcards and interactive kiosks provide an interface to shopping and business, and all flavors of telecommunications are represented. Step into Cyberport, and you step into the future of digital city living. At U.S. $2 billion, this flagship project is an unquestionable symbol of Hong Kongs determination to become the digital city for the region. It is also an interesting embodiment of the decisions facing the regions digital entertainment industry.

Through the veins of any digital city course substantial opportunities in content creation, distribution and consumption. It is as vested in offering the goods as it is in connecting consumers to receive them, with a particular advantage in interactive content such as games and interactive television. A well-designed infrastructure can reach beyond local borders into other consumer markets. The same infrastructure can be equally viable in offering international companies the latest tools and technologies alongside trained employees to man the switches. Content creation can often be better served in a high technology environment, where development can be streamlined and distances and time zones cease to be deterrents. But while technology and infrastructure provide some level of universality, content does not translate across borders as readily. Does the digital world offer content creators an edge in the entertainment industry or are story and content truly abstracted from technology?

Francis Ho of the Government of Hong Kong SAR and Nicholas Yang of Cyberport welcomed a second forum of international guests to the Digital Entertainment Leadership Forum (DELF) to chew on the issues facing the digital entertainment industry and to shed some light on future paths. As a one-day conference the organizers gathered a solid sampling of digital entertainment expertise across film, animation, special effects, online and mobile games, audio, ITV and themed attractions. Although the role of digital technology in content creation and distribution was prevalently discussed, the intriguing insights came from the natural juxtaposition of the 15 international speakers who gave a strong voice to distinct consumer values and preferences from different parts of the world.

The Hong Kong government is making great strides to become the digital media hub for the region. There is a strong desire to use the digital infrastructure to nurture local talent and develop original creative IP, but interest from international companies looking to capitalize on government incentives also means promising business as a location for outsourcing. Pascal Herod from Duran Duboi enthusiastically stated, it was not just the tax breaks and the lower production costs but the energy of people willing to work that appealed to his studio. Moreover, a media hubs ability to straddle both digital and cultural divides could prove to play a pivotal role as the East and West look for ways to reach each others respective markets.

Fortunately, the future of digital entertainment does not appear destined to become a homogenized landscape devoid of culture and character. The distinctive tastes of consumers all over the world make it virtually unthinkable, and the perspectives and insights of the 15 speakers at DELF seemed to confirm it. Living in a digital city means that we can be entertained anytime and anywhere, and the competition for our attention span will be widespread and constant. Therefore, it is the story and the experience that will have to stand out.