This is a revised article that was originally published in the Spring 2003 issue of the ASIFA-Atlanta seasonal publication, Keyframes.

A few of us splurged this October and took ourselves to the Ottawa International Animation Festival. We would have attended Annecy, Zagreb and Hiroshima, too, had it not been for the lack of independent wealth. But I don’t really mean “splurged” in the monetary sense. It does, of course, cost a few bucks to get there and get in, (I’ll take a moment to mention there is a discount for ASIFA members). No, splurging here is more like a visit to the fairgrounds—a sight and sound extravaganza with loads to see and do and a finite time in which to do it all. For a few short days you fill up on cotton candy and corn dogs and squeeze in as many rides as possible before the whole thing packs up and leaves town, not to be seen again for an entire year. 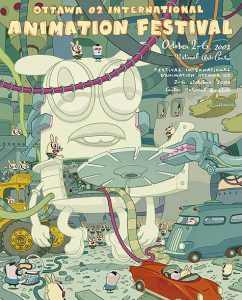 In this case, it’s actually two years. The Ottawa International Animation Festival (OIAF), started in 1976, takes place every other year (since 1997, the odd years have been filled by the International Student Animation Festival). It has grown steadily, becoming the second largest animation festival in the world behind the aforementioned Annecy festival. It attracts a large mix of students, teachers, independents and studio executives, and enjoys various forms of support from the extensive local animation community, including strong connections to the National Film Board of Canada. (Chris Robinson, the festival’s artistic director, spent a considerable amount of energy writing a lengthy and thorough article on animation in Ottawa, which you should just go and read if you want the full scoop – see “Animatin’ in Adawe” on the AWN website. ) So, it’s big, it’s important, it’s international, and it’s really close by. As this year’s honorary festival president, David Erhlich, so aptly pointed out “I can drive across the border and leave whenever I want.” David lives in Vermont. For those of us in Atlanta, the equivalent is a two-hour plane ride or an 18-hour drive give or take a few miles per hour, but that still keeps you in the same time zone.

If my sources are correct, OAIF is also the only competitive festival in North America, so when you survey the grounds, the competition screenings are what you get in line for first. All films go through an extensive selection process, which means there are a few exhausted, bleary-eyed festival jurors not willing to get near a VCR anytime soon unless a large sum of money is involved. Maureen Furniss, who now teaches down at SCAD, was part of the Ottawa selection committee in ’96. She and her fellow jurors watched thousands of animated works ranging from ten seconds to 30 minutes in length; 10 hours a day for five days, then four hours a day for another 3 days. If you ever meet a member of a festival’s selection committee, thank them for making your life easier. Offer them a cup of coffee and a shot of Visine. Don’t disturb them if they doze off during the conversation. These people have done the hard work for you, and as a festival attendee you’re seeing the cream of the crop and the particular choices that help shape the style and personality of the festival.

Ottawa’s films in competition offered an eclectic mix of commercial and independent work, a great variety in themes and techniques (it’s not all computer animation), and a broad emotional sensibility. The more humorous pieces tend to be crowd (and jury) favorites and this year there were two that stood out: Leunig: “How Democracy Actually Works,” a short film that postures where democracy is concerned, a toilet is never very far away; and “A Kis Tehen” (“The Little Cow”) whose theme song is destined to become a rousing, stein-clanking, barroom sing-along. Another personal favorite was Tom Schroeder’s “Bike Ride” whose plotline can be summed up thusly: a guy rides his bike to see his girlfriend and then rides home again (you’ll have to trust me on this one – it was charming). 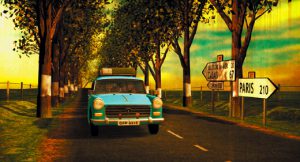 The handful of visually stunning films included, again according to my own personal tastes, “The Rise and Fall of Anglobilly Ferverson,” “The Young Girl and the Clouds,” “Pipsqueak Prince,” “Novelty,” “Dad’s Clock,” and “Francois le Vallaillant.” Cartoon Network had two Samurai Jack episodes in competition, and the series’ graphic purity and elegant style is only amplified on the big screen – it’s no surprise that Samurai Jack won an award. If you check out the Ottawa festival website, you’ll see that the winners included the lively (that’s a pun by the way) “Hasta Los Huesos,” “The Hedge of Thorns” a beautiful childrens film out of Norway, Chris Hinton’s wonderfully spasmodic “Flux,” and Robert Bradbrook’s “Home Road Movies,” the grand prize winner.

If all goes well, we’ll get a chance to see these films sometime next year, but I’d like to mention the pieces that got an asterisk in my program. If it weren’t for the program, I would never remember what all I saw. By day three, your head is full and your eyes are tearing and you get annoyed when the ushers make you get up from your seat every few hours. It’s only an elaborate program coding system that keeps things in check. Mine consists of placing an asterisk next to the films I liked and nothing next to the rest. The films with asterisks not mentioned above were: “Das Rad” (The Rocks), “Atama Yama” (Mount Head), and “Barcode.” All those asterisks remind me of the Herculean task facing the festival jury during competition screenings. Linda Simensky at Cartoon Network was on this year’s Zagreb jury where “Barcode” took home the grand prize – a decision that kept the group in heavy debate for several hours. This is a reassuring sign of the high caliber of the films submitted, and I’m certain the Ottawa group faced similar deliberations. 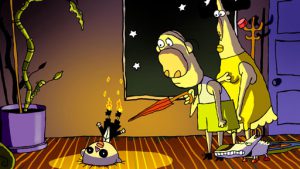 “Barcode”‘s creator, Adriaan Lokman, was at the festival and I had the chance to talk with him briefly about his film while strolling the grounds of the Ottawa parliament buildings. This is one the best reasons for taking the two-hour plane ride: the opportunity to meet the filmmakers in the flesh amidst grassy knolls and historic river canals. I chatted with Cordell Barker (“Strange Invaders”) while riding the upper deck of the double-decker bus going to the festival picnic. In case you were wondering, the windchill factor in Ottawa in early October at 45 mph in the open air is about 34 degrees fahrenheit. Mr. Barker ducked low-hanging branches and talked about the tribulations of doing his own voice work. The workshops and panels proved a less hazardous place to interact with the filmmakers. The safe havens I attended included David Erhlich’s presentation on his non-narrative work, Nicole Saloman’s discussion on her childrens animation workshops, the storytelling panel with David Fine (“Bob and Margaret”), Mo Willems (“Sheep in the Big City”), and John Krisfaluci (“Ripping Friends”), “Timing for Animation” by the very James-Woodsian Greg Duffel, and Piotr Dumala’s highly unique plaster-engraving animation demonstration.

As with any good fair, you’re bound to miss some of the leading attractions. The line to get in to see John K.’s talk was about the same as trying to get on the Whippit’. And I’m very sorry I missed Taku Furukawa’s retrospective. But the list of what I didn’t see isn’t as long as what I did, and I came home with a bag of goodies and a program full of asterisks listing films to track down for ASIFA screenings. The theaters are quiet now. The persistent ushers have gone home. And the jury members and the festival directors might actually be getting some sleep – at least until the the whole thing rolls back into town another year from now.