This is a revised article that was originally published in the Winter 2002 issue of the ASIFA-Atlanta seasonal publication, Keyframes.

This is my first column for ASIFA-Atlanta. I’ve been chewing on it for about a week and a half now. When we started outlining this edition a while back I was aware of one persuasive factor: we were going to send a complimentary issue to everyone, letting you know what’s going on in Atlanta, and hoping to intrigue new members. So I’ve been finetuning little phrases, reworking the structure, and generally fussing over it for hours on end. Thankfully I’d been given a deadline so I can at least say it’s finished and in your hands.

Suspiciously enough, I have a few pieces of animation that have been through similar contortions, but without the handy deadline. I started working on them several years ago. I also joined ASIFA about that time and there’s a parallel to why my stuff isn’t finished. At practically every ASIFA screening or event, I walked away with a reason to rethink and revise what I’d been working on—an inspiring new idea, an engaging style or technique, or simply a more effective way to animate. I’ll elaborate with a story that I get to tell now that someone has handed me a column in which to tell it. 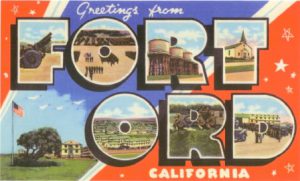 In 1997, I spent four weeks of the summer driving back and forth from San Jose to Fort Ord. The vacated army barracks, recently converted to the Monterey Campus of Cal State, were deserted except for a few buildings being used by the Walt Disney Studios. My second day on campus, I found myself in a packed classroom standing across from Andreas Dejas, superstar Disney animator. He was discussing some early character animation he had done of “Scar” from the Lion King, pointing out “big problems” and “ugly animation.” We all leaned forward, searching for ghastly imperfections, quietly noting that every sequence looked absolutely exquisite to us. 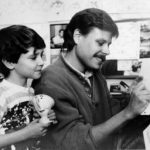 This particular summer, Disney had scoured the country’s schools looking for other future superstars to attend their first-ever Boot Camp—a four-week intensive program on all things Disneymation. I was there, not as a superstar student, but as a non-distracting guest who would be covering the basics of Drawing for Animation at DeAnza College in the fall. The director of DeAnza’s animation program, Marty McNamara, had arranged for me, one of just a few additional, non-distracting people, to attend the lectures. These master classes were presented by a dizzying list of Disney’s finest: Dave Pruiksma, Jean Gillmore, Ron Husband, Dave Bossert, Dan Hansen, Lisa Keene, and of course, Mr. Dejas. 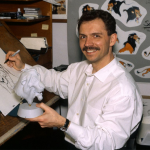 The rooms were small, however, and for the sake of space they had provided only enough chairs for the students. For the four weeks, the guests were to stand in the slivers of what was left over. I had no intention of complaining—I was there to catch every word these people uttered. Fortunately, Bill Matthews, Head of Recruiting for Disney, deemed it ludicrous that the guests wouldn’t be allowed to sit (ever). Extra chairs were squeezed in, and to him, my knees are eternally grateful.

Okay, that’s my story. It’s not a knee-slapper, but I like it for two reasons. As I’m sure you can tell, I enjoy the part about the seats—here the studio had cracked open its doors to a few folks for what was without a doubt a once-in-a-lifetime experience, and the person heading up boot camp honest-to-goodness didn’t want a handful of us using chairs. It was just one space-conscious person, but it’s the sort of amusing irony that gets extended to the studio from time to time. 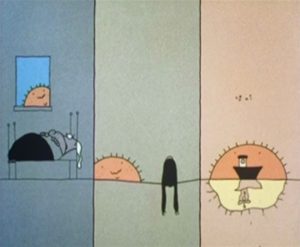 Paul Driessen’s “The End of the World in Four Seasons”. Image: Cartoon Brew

On a grander scale, however, it represented a concrete example of larger forces at work in the animation community. The kind of thriving environment that somehow gets you in a room with Andreas Dejas and lets you nitpick with him. In many ways ASIFA was directly responsible for getting me there. I’ve mentioned that Mr. McNamara is the one who got me into the sliver of space where Mr. Matthews put the chair. But becoming a member of ASIFA opened the whole chair-door, if you will. Besides boot camp, there was a seat at the screening of “The Thief and The Cobbler” (in its rare unfinished, un-mutilated form), some elbow room at the panel of PDI directors and producers discussing “Antz,” standing room only around independent animator, Paul Driessen. These are plum spots scattered liberally among the most consistent seats in the house: watching great animation.

All these opportunities have had lasting effects on my own animation: none of it’s done yet. As you can imagine, four weeks of learning how Disney does it is bound to make you rethink your own approach. One argues, if Mr. Dejas’s animation is ugly, where does that leave my stuff? But that’s just one (big) studio’s take on making films. ASIFA has been around since 1960, and although it cares for and houses its own film archive, the ASIFA “catalog” is really more a network of members who subsist on sharing. Not just films, but ideas, experiences, stories—even decades-old artwork, crusty and magnificent. In this worldwide, internationally-intertwining, glorious hodge-podge of all those bitten by the animation bug, it’s been darn near impossible to focus. But if you really want to finish something, you set a deadline.

ASIFA-Atlanta has one coming up. In November, we’ll be hosting our own local showcase, the fourth annual “Roll Yer Own.” Our chapter is young, but I figure if we keep at this long enough, we’ll be able to send our showcase out to others, causing distractions and forcing people to rethink their own approaches to animation. It’s only fair. I won’t have anything “finished” per se by then, but I plan to show what trickling of stuff has seeped from my drawing table. I’m hoping you’ll have something, too. Rest assured there will be plenty of chairs for everyone.